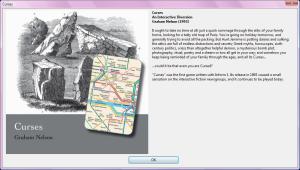 This is a bit of irony. I just purchased a new computer system. Some specs:
Pentium Dual-Core E5200 Processor (2.5 Ghz, 2 MB cache)
4 GB of memory
500 GB hard drive
Intel Graphics Media Accelerator X3100
Integrated 7.1 channel audio
18″ widescreen flat-panel monitor
What did I most look forward to doing with this computer? Why, writing and playing Interactive Fiction, of course. Which is predominantly text-based. Ha!

The thing is, I like the way IF looks on my widescreen monitor. The only noticeable difference is that text is displayed in longer lines, and more text can fit on the screen at a time, due to the fact I’m running at a higher screen resolution than before.

Oh, there’s one other difference that I’ve noticed so far. The title screen for Curses by Graham Nelson (curses.zblorb) looks reallllllly nice (see above). It actually seems as if these title screens were meant to be viewed in widescreen.

So now I’m playing IF in a widescreen format. Where are the deleted scenes and optional author commentary? 😛 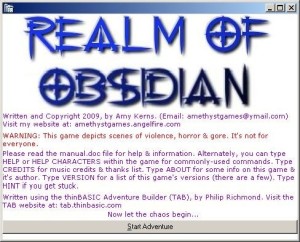 That’s right, Realm of Obsidian has finally entered the beta stage. Check this page for some basic information. If you’re interested in signing up for the beta, send me an email at amethystgames@ymail.com. Beta must end before the end of March, as I will be entering the game into the Spring Thing competition.

This may just be the first game released using TAB (thinBASIC Adventure Builder). You can read more about TAB here.

This is a short entry, as I’m not really allowed to reveal any more about the game than I already have, due to competition rules.

What is Interactive Fiction? And why? 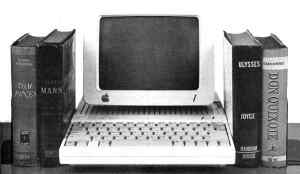 Here I am. First blog, first post. And based around interactive fiction. Some of my friends in real life were previously unaware that I had even the slightest interest in IF. (From here on, I will refer to Interactive Fiction as “IF.” My fingers will be very thankful.) Many of these friends also really don’t know what IF is. I’ll attempt to explain what IF is (some basic information on how you can use a computer to play a story in which you are the active participant), and why I’m enjoy writing it.

Writing IF is like writing a novel, except that the writer must account for everything that the main character might decide to do. Suppose the main character’s daughter has drowned. Naturally, you would think that this parent would try to save the child. What if the main character decided to look at the people and objects nearby? What if this parent wanted to walk away and do something else instead? (These are things I tried to do in Adam Cadre‘s game, Photopia. Why would I let her drown? What’s wrong with me, you say? Well, I just wanted to see what would happen, okay? Sheesh…) The game (though some would argue that not all IF are games) could just tell you something like, “You really don’t want to leave your daughter like this!” Or it could just let you do what you want and witness the consequences. Maybe your daughter would die. In Photopia, you are allowed to be an inactive participant, but then another character in the game ends up performing CPR on your daughter.

IF games have a very simple principle. You’re presented with a block of text, and then a certain amount of the game is turned over to you. You enter a command which might (or might not) advance the flow of the narrative. Commands usually start with a verb, followed by a noun, and prepositions and other nouns may follow. Some examples: open door, climb the ladder, attack guard with knife, give apple to teacher, talk to father, remove the gold coin from the chest, wear necklace. (As you may notice, the word “the” is optional. Most games will ignore the use of “the,” “a,” and “an.”) Results from a command may result in failure, something in the game world being changed, or perhaps the end of the game (and perhaps the main character) entirely. Consider the first example above: open door. Failure could find you reading this: “You turn the knob, but you discover that the door is locked.” Success may result in: “With a creek, the door opens wide.” And to take this example to the extreme: “Ignoring the yellow and black emblem on the door, you open it. You are hit with a blast of white-hot radiation that immediately begins liquefying your internal organs. Thankfully, you lose consciousness before it really gets messy. *** You have died ***”

The first IF games available to the general populace were commercial products. We’re talking the early ’80’s here, folks. The most successful purveyor of these games was Infocom. These games are considered to be classics today, even though many more recent games have surpassed Infocom’s in size, scope and functionality. Zork was the first game released by Infocom (as well as their best seller), though later games were much more prosaic and profound by nature. One such game is entitled Trinity, and it has the player travelling through time to stop a nuclear explosion that happened at the beginning of the game. Trinity expresses an atmosphere of paranoia, impending doom and hopelessness… interspersed with moments of beauty and awe. 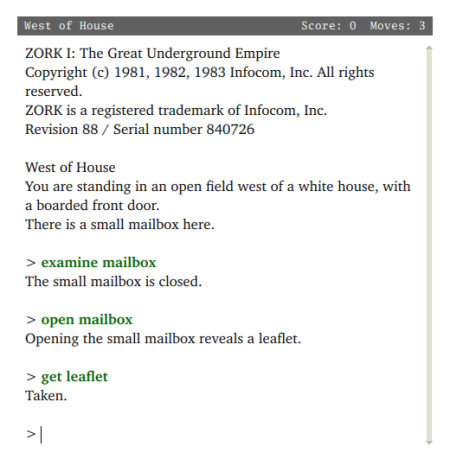 Infocom and another companies specializing in IF (then more widely known as text adventures) went out of business around the late ’80’s to early ’90’s. However, the fall of commercial IF eventually brought about something even more wonderful: today’s IF community. With the advent of authoring systems like TADS, Inform and ADRIFT, people were able to easily create IF of their own. The need for programming such games in languages such as BASIC or C++ was not needed. Most of these authoring programs were free or shareware (“try before you buy”). Most of the games produced by these programs followed suit. Today, the IF community is a small but a healthy one. Most games are completely free. Just download and play. There are three major annual competitions, and games of virtually any genre are produced. Some games feature graphics, sound and even full-motion video clips. (As a side note and unabashed plug, my own Realm of Obsidian features sound effects and music.)

I’ve covered the “what.” The second question I tend to get is: “Why?” Besides the fact that I greatly enjoy playing such games myself, it lets me be creative and use logic. One aspect is the story. The other aspect is programming.

The story suits the creative side of me. I’ve written two (non-IF) short stories, and three unfinished novels. I love the art of creating a world that’s all my own. A world that the reader can (hopefully) get drawn into and experience as if it was a real place. Characters they can identify with, admire, or despise. Places to learn about and explore. IF takes this to the next level. The reader can change the story, influence the course of events, and alter the narrative entirely.

The programming fits my logical side. How do I make what I want to happen… happen? For example, how would I make a text and audio countdown work? Suppose the main character is in a space shuttle waiting for liftoff. I can make (or find on the internet) ten sound files, that would have a voice saying “one” through “ten.” I could name them one.wav, two.wav, etc. That’s the easy part. Now to make the sounds “count down” from ten to one, no matter what the player does. Text would print on the screen as well (“SEVEN…”), for the benefit of those who are playing without sound, or maybe for those who are hearing-impaired. Figuring this out and seeing (and hearing!) it work is very satisfying to me. I imagine that if I were playing such a game for the first time, I would find it to be quite a cool and immersive experience to hear this countdown.

Giving something back to the community is another factor. All that modern IF authors seem to get in exchange for their hard work comes in the form of reviews from online webzines, emails from those who played the game, and if the game is very good, a modest award from an annual IF competition. But the real reward goes much further than that. People can play your story, become immersed in it, and be a part of a world you’ve created. They may then become inspired to make their own game. Maybe they want to see if they can do it better. Maybe they want to try a whole different genre. “This science fiction-based IF was really good stuff, but I want to create a murder mystery.” With the sophistication of authoring systems today, your imagination is the limit.

Imagination is something I’ve always had an abundance of. I haven’t finished Realm of Obsidian, yet I have ideas for at least four other games! Writing IF gives me an outlet for my creativity, a way of puzzle-solving and bringing my story to fruition, and a way to belong and contribute to a community based on literary achievements, creative expression, and free enterprise. It’s very rewarding to me.